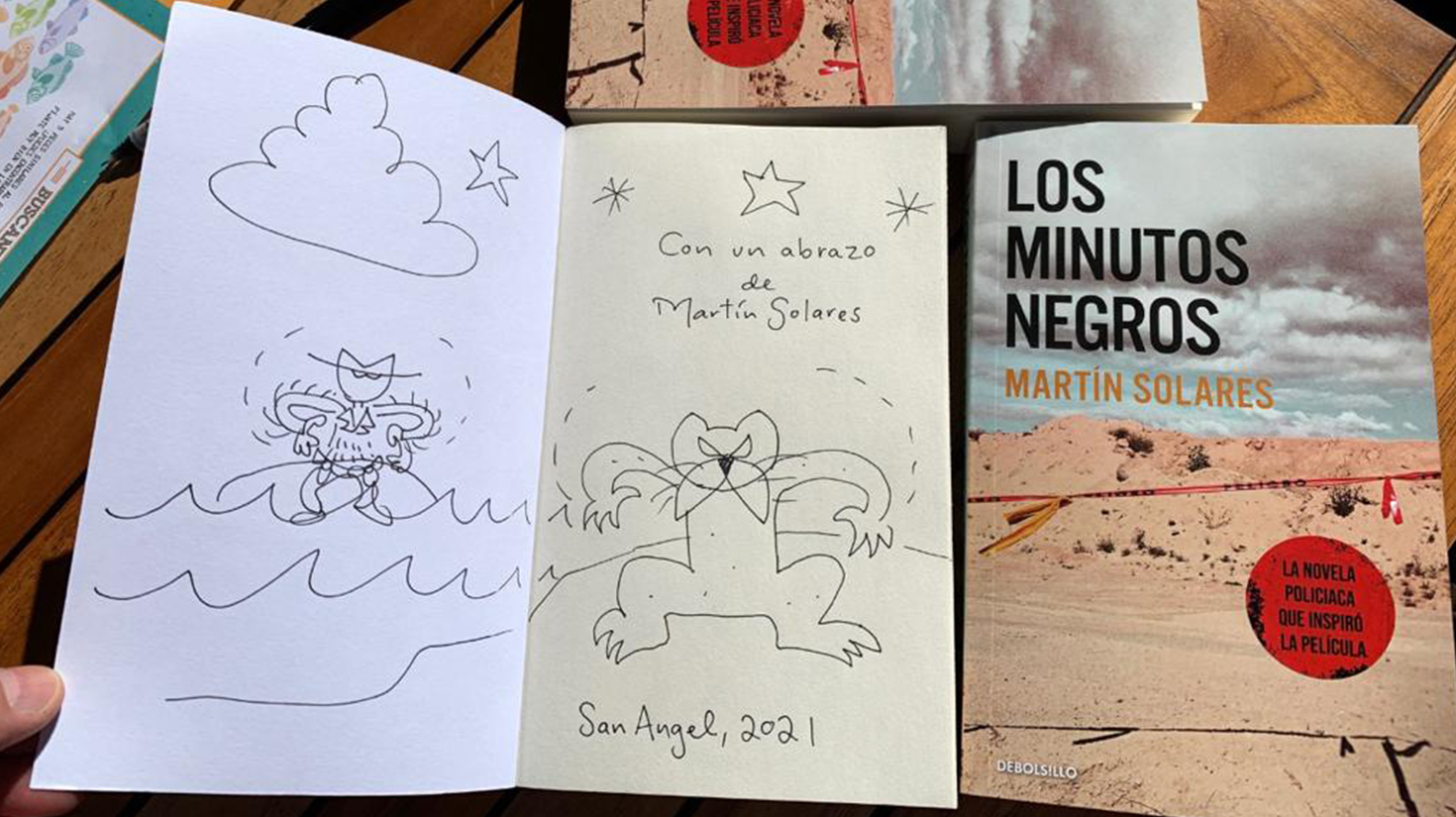 From una shore to another. Adapting a novel to film.

As my friends know, for ten years I worked secretly and obsessively on my first novel, which is always the most difficult. Frank Goldman told me to enjoy that moment, because life often changes radically as soon as the book is published, and he was right. Less than a month after the publication of The Black Minutes, my editor told me that the director Mario Muñoz wanted to adapt it into a film. Mario invited me to see his debut feature, Bajo la sal, which was still in post-production, and although the copy did not have the final special effects or sound, it fascinated me for the same reasons that have made that film a cult object for lovers of the genre: starting from a singular story, Mario turned the landscape into a poetic and disturbing character, and he took his actors to a high level of excellence through a story that exhibits a deep knowledge of the challenges and possibilities of film noir. I told him that he could have my novel if he planned to do the same with it.

We wrote the script with four hands for five years. We tried everything. We worked evenings, nights, and weekends, and took time away from our other jobs; I stopped counting when we got to seventy versions. We would meet in my studio at night, when I finished writing my novels and editing others, and Mario came from rehearsals of a play, making a short film or working on his company. Thanks to director Ernesto Contreras we were invited the legendary Sundance workshop, where we had the advice of Laura Esquivel, Beatriz Novaro, Jeremy Pikser and Zachary Sklar. Laura Esquivel, who read it, gave us invaluable advice: "Remember that art must always offer a window to the viewer." With those words in mind, we went back to working another year and a half on improving the window, until the result made us smile.

For me, working on that script was the equivalent of working in a laboratory. I agreed to writing the four-handed script with Mario because I wanted to learn where the frontier between literature and cinema is. I wanted to discover the challenges involved in rewriting a story that already existed in a second artistic language, or in other words: finding out what it is that only literature or cinema can access, each in its respective language.

Contrary to what the most loyal fans of a book expect, adapting a novel to film is not the equivalent to translating each event into images exactly as it happened in the novel beat by beat, much less replacing a few words by others, as would happen in a translation. For me it is a job that must be done in four stages: 1. Get to know the work in depth, even in its smallest details, reflect on its secrets and discover what role each element plays. 2. Make a list with the best moments, dialogues and characters in the story: those we would like to see in the film version. 3. Forget about the form of the original narrative and discover what is the best for a film story, which will pass before our eyes at its own unique speed. 4. Be willing to rewrite what we like best as long as it is possible to replace it with something better: with that in mind, trim and tweak until the script can be funded by a producer who understands the nature and scope of the project.

I learned very early that a good adaptation must create its own rhythm, and that it is worth taking the risk of creating something other than the starting point, because if the writer did his job well, the novel already exists and nothing will change it: it is the filmmakers who now have to accept the challenge and catch the aroma of the original story. But when it comes to film, there is always another very important writer: luck. When we thought that the script had overcome all difficulties, Mario’s relationship with his producer fell apart. The money was cut in half and Mario called me to ask how we could take half an hour from the script, because he had no budget to produce it in its entirety. I was going through family and work complications, so I couldn't get involved in this stage, so I limited myself to suggesting: "Let's stay with the central story, the one that occurs in the seventies." Mario came to the same conclusion and wrote a different ending than the novel, but consistent with the profile of the characters and the story: I'm sure the readers of my book will like it. Later, when I was invited to see one of the first edits, even without the special effects or the final sound (which is already becoming a tradition among us), I found the result fascinating. All the actors dazzle: Sofía Espinosa is like a hurricane in this story, but the work that Leonardo Ortizgris, Krystian Ferrer, Carlos Aragón and Enrique Arreola did to give life to Rangel, el Macetón, el Travolta and Romero will leave anyone speechless, And even the actors who only appear in a few decisive scenes on screen make us feel that the world revolves around them: Tiaré Scanda, Waldo Facco, Mauricio Isaac. And boy am I demanding.

The recreation of the seventies in the Gulf of Mexico is spectacular: the costumes, vehicles and furniture relive one of the darkest moments in the history of our country. Film is a dream that we witness with our eyes open and Mario achieved a dazzling dream, full of color and magic, which takes us to a parallel universe from the first image. He wonders what justice is like in the confines of the civilized world, what a policeman who lives in the jungle and is forced to investigate a predator who attacks the most defenseless people in the city should do; and of course, how reliable is justice in our country and why it seems like an unattainable dream. The result is exquisite. If you want to remember what great art is, go see this movie, which looks like an intense dream, at times funny but always disturbing, like the quest for justice.

And I came to another conclusion: the limit between literature and film is as far or as close as we want to set the limit. Some leave it out of the equation while others put it at the center at all times, so that it is like those waves that reach the coast and revive the sand. I hope the readers of The Black Minutes and the viewers of Bajo la Sal enjoy this film as much as those of us who work on it with all our hearts.